‘Twas a rainy night in the Lowcountry.  Usually around this time of year we look forward to hot soups, chili with warm cornbread, or a nice steaming cup of chai latte.  However, mother nature decided to delay winter this year and give us mild weather with thunderstorms and tornado warnings.  After a full Saturday of rain, I was in search of a little Sol!

The Beard and I decided to check out Sol Southwest Kitchen and Tequila Bar.  You can’t help but notice this building as you travel on Highway 17.  It shone like a modern beacon among the other lackluster buildings nearby.  Perhaps this was a sign of things to come being that less than one mile away is the up and coming Nexton area.

As you walk toward the front entrance you can see the garden lit patio for outdoor dining almost masking the scenery of the Bi-Lo parking lot or the Advanced Auto Parts across the street.  Ok…so it’s not centered somewhere off the coast of Fiji, but stick with me on this.  The concrete walkway is painted like a turquoise gem.  I actually fought with myself to decide if I wanted it to be turquoise or patina.  Either way, it set the scene well.

Our hostess was friendly and sat quickly, but remember there was a storm churning outside, so it’s no surprise that the place was a proverbial ghost town. 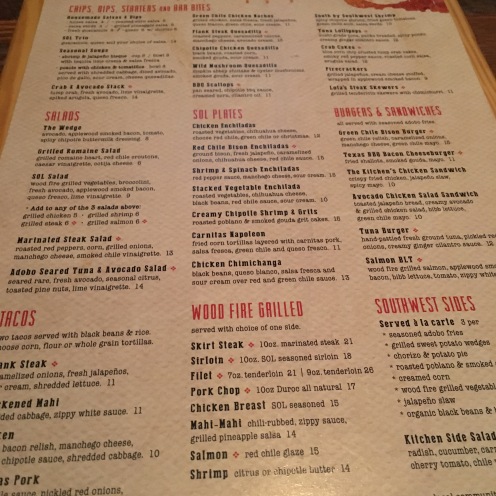 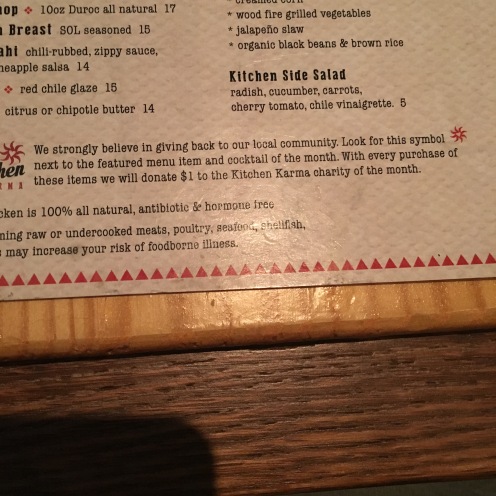 I loved how the menus were mounted to a wood plank with the restaurant’s logo seared to the back.  This alone lets me know that we were about to embark on a fiery journey.  The menu alone immediately warmed me up with mention of chipotle, poblano, and jalapeño.  My eyes stopped looking at the delicious options for a brief second and fixated on the mention of Kitchen Karma.  Commendably, Sol donates $1 of proceeds for a featured menu item to a different charity each month.  Based on their website, they have donated a total of $33,470 to local charities.  Now that’s delicious! 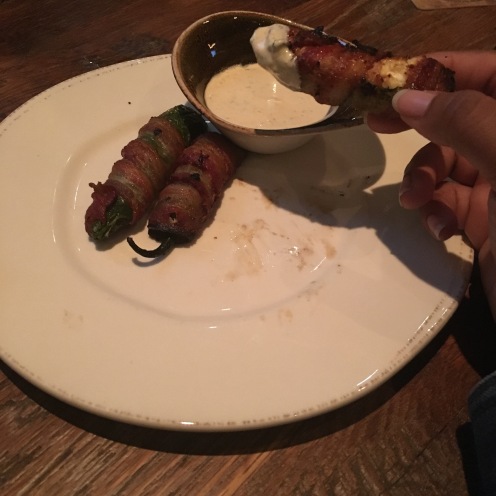 Our appetizers were the Firecrackers: grilled jalapeños, cream cheese stuffed, wrapped in applewood smoked bacon.  Ermahgurd! These spicy bits of happiness satisfied the salty beast within me.  Before ordering, I had to ask if the seeds and ribs were scooped out (which they were), because I like to prepare for my pain.  Luckily, they were not too spicy.  This would be a great bar food snack.

For the main course, I opted for the Wood Fire Grilled Mahi-Mahi.  The Beard chose his usual dish, shrimp and grits.  (As you read my blogs, you will notice a theme with The Beard’s menu options.)  I had a small taste of the shrimp and grits.  The dish was a South meets Southwest fusion: smoked gouda fried grit cakes and adobo seasoning on the shrimp.  It was quite tasty.  The mahi-mahi had a chili rub and was topped with grilled pineapple salsa and “zippy” sauce.  The green sauce that lined the plate reminded me of a chimichurri sauce.  Although the fish was seasoned perfectly, it was a bit overcooked for my taste.  Nonetheless, the flavor was a perfect blend of savory, tangy, and sweet.  For my side, I chose the organic black beans and brown rice which was a flavorful option.  The combination tasted like the rice was cooked in broth.  I could hardly tell that I was eating brown rice.  Although one side comes with the meal, there was another item on the menu that I had to try…

Chorizo and potato pie…it’s sausage…it’s potatoes…it’s cheese…and it’s a pie!  I was happy that this quiche-like side dish was not a greasy mess, as chorizo tends to have a lot of fat.   Spanish chorizo is a pork sausage that gets it’s smokiness and red color from dried smoked red peppers.  I could definitely have this for breakfast with a fried egg and some sliced strawberries.  I may need to ask the manager if they sell the pie whole.

If you are looking for a place that serves tequila, this is it!  The tequila options are presented like wine list, giving an extensive list with flavor profiles.  A girl like me just looks for the magic words, “Jose Cuervo”.  However, I needed to step outside my comfort zone a bit.  Earlier that weekend, I had my fill of straight tequila at my BFF’s birthday/divorce party, so I wanted to try one of their cocktails: The Healer.

Although quite sexy looking, I could not taste the alcohol in this cocktail.  I would think that a drink with 100% Blue Agave Tequila and Myer’s Dark rum would have a bit more of a kick, but honestly it just tasted like juice.  Other ingredients for this drink were cream of coconut, pineapple juice, and a coconut nutmeg rim.  This may be a good drink for the lightweight that wants to fit in with the other drinkers.  This may also be a good drink to sneak up on you if you have one too many.  In my opinion, the flavor combination was good, but the alcohol content was quite weak.  This was a perfect reason to go for round two…

I tried one of the many tequila on the list: Don Julio.  Being that I am a fan of buying a whole bottle of Jose and keeping it for about a year or more, I was a bit reluctant to try a $12 shot of tequila.  Whelp, to add a proper cliche…YOLO.  This tequila was described as having a sweet vanilla taste, and it was aged 1-3 years.  But you know what I tasted…tequila (cue the Pee-Wee Herman dance).  It was strong, it was warm, and it packed more of a punch than “The Healer”.  As a matter of fact, all of the tequila in the restaurant should carry the moniker of “The Healer.”  I’m sure that a shot of Julio will cure (or kill) whatever ales you.

The Beard tried the Lo Fi Mexican Lager…from Charleston. Yeah, I had the same confused look on my face.  According to him, the beer reminded him of a Heineken.  I took a sip.  Curlz says, “It tastes like beer.”

For desert, I had the salted caramel cheesecake.  The flavor was really good, and I tasted the pecans in the graham crust.  However, my salty beast began to awaken, looking for the “salt” in the “salted caramel”.  On the menu, it listed pink Himalayan salt as an ingredient.  I anticipated seeing a cheese cake smothered in caramel with a sprinkling of the pretty pink salt.  Alas, I only saw the cheesecake drizzled with the sauce.  I asked the server, “Where’s the salt?”  She told me that the salt was mixed into the caramel sauce.  I hang my head low in despair before channeling my inner Superman, and I screamed to the sky as I held the cheesecake in my arms.

Or maybe I just frowned a little and finished the cheesecake.  Either way, I was a bit disappointed about the salt.  Overall, it was a tasty treat.

I give Sol Southwest Kitchen a 3 on the Curlz Chart.  There is plenty of flavor floating through that place, from the decor to the menu.  I was a bit disappointed about my cheesecake (refer to the Superman video if you need a reminder).  However, I would definitely try this place again.  Plus the restaurant serves Sunday brunch.  That in and of itself is good reason to revisit the sunlit beacon that is Sol!